Most available databases have some element of location to them. According to officers working at the open data portal of the US government, around 90% of their datasets contain geographical information, ranging from streets names to precise coordinates. In this tutorial, we will show the different kind of maps you can use to convey information and enable users to interact with and explore the environmental data you’ve gathered to support your story.

Points are the simplest symbol used to make maps. You can simply pin your map with a specific location you would like to highlight or you can include many points, or icons on several locations to represent your data.

On the example below, done on Google Fusion Tables, the species of Butterflies are mapped in Costa Rica.

These maps are useful when area, boundaries, shapes or limits need to be represented. A classical example is world boundaries map or a map representing the different natural physiology within a protected area

When a concentration of occurrences or points of interest happen in a same location, it is possible to group certain areas together using an average value over an area. Also known as isoline maps, and used often for visualizing weather data, “heat” maps can used to visualize particularly intense concentrations evident in your data.

The example bellow shows the biodiversity hotspots around the globe by measuring biomass density.

The red areas represent those with highest species density and the blue territories , the lowest. Courtesy of Saving Species 2012

This kind of map is similar to a point map with the difference that you scale the size of the points according to numerical values, creating the a bubble look to highlight events on specific location. This map style is also referred to as a “graduated symbols” map since a designer is not limited to circles for their symbols.

On the following example, the locations of forest fires are scaled according to the number of events. This map was done on Tableau Public Software.

The size of the bubbles over the map represent the amount acres burned, showing that the West Coast of US is more affected over a period of 10 years. Image: Courtesy Tableau Public

Coloring polygons like country boundaries according to the values represented on the map is the cloropleth map. This classic form of cartography maybe the most well recognized map style. Political maps like the ones that show divisions between Republicans and Democrats in the US are on every TV newsshow and newspaper. But there are many more ways to use this style map. One of them is applying a gradient respecting a numerical range. To choose colors, we recommend the tool Color Brewer.

A cartogram distorts the size of shapes on the map according to the the values they represent. The example bellow reshape the size of the countries according to their carbon emissions. As you can see immediately, US and China get really swollen while the whole African continent almost disappear 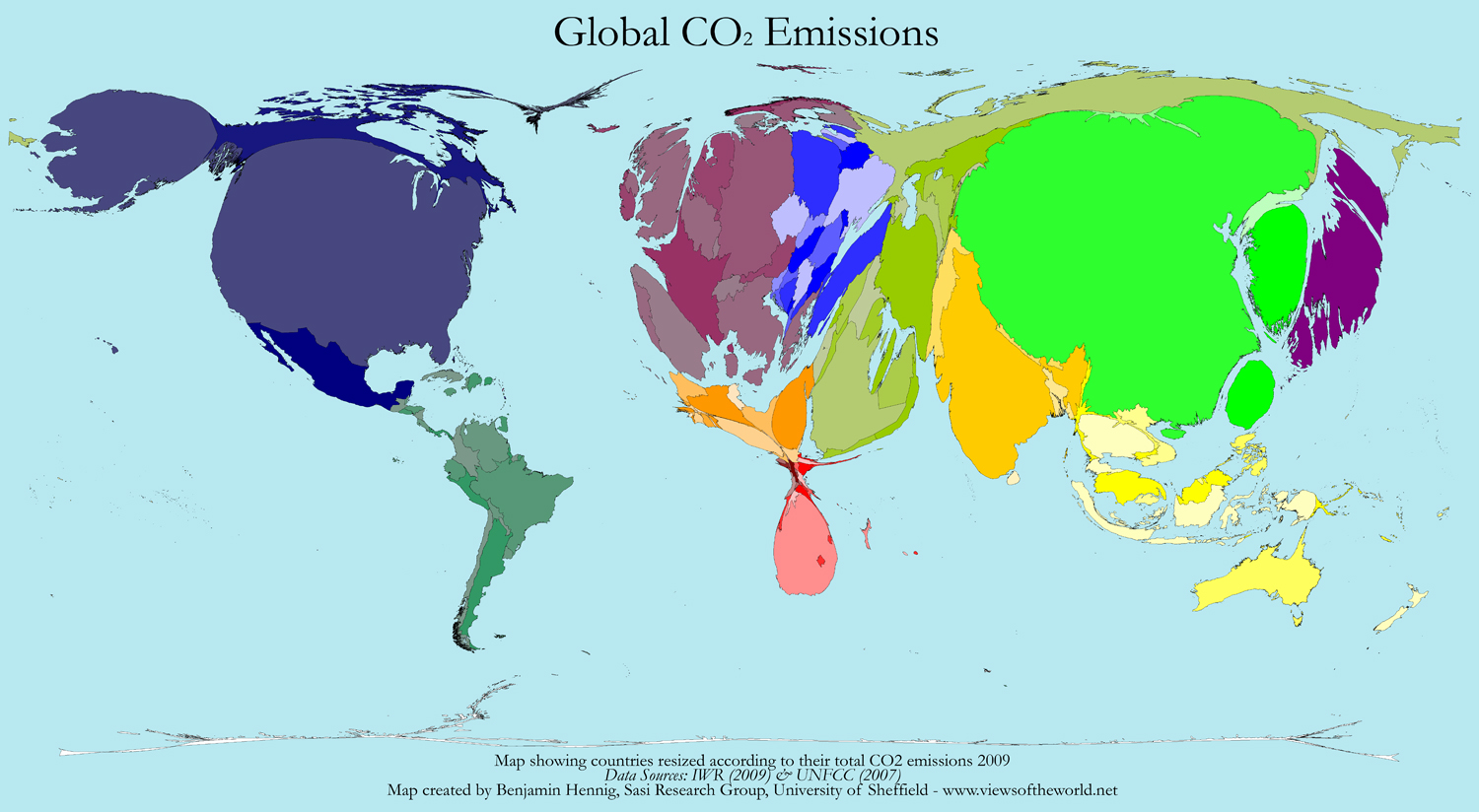 Gustavo Faleiros is an environmental journalist and media trainer who specializes in data-driven journalism. In 2012, he launched InfoAmazonia, a digital map that uses satellite and other publicly available data to monitor the Amazon rainforest.