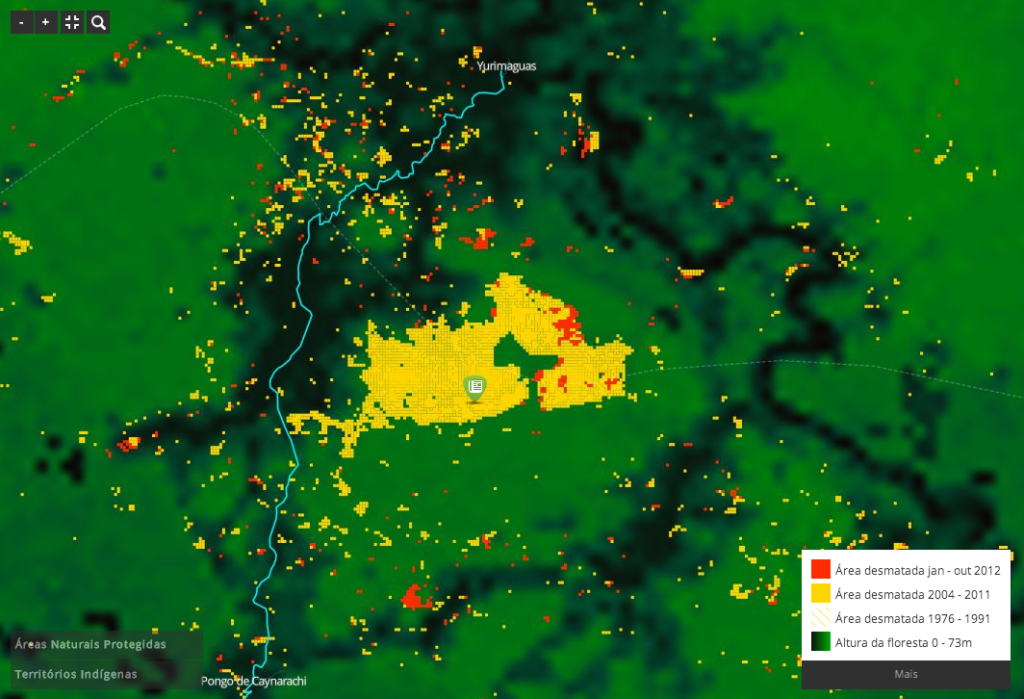 Mapping deforestation in the Amazon Rainforest, via InfoAmazonia.org. InfoAmazonia is a primary example of GeoJournalim, the practice of contextualizing local news with visuals derived from satellites, sensors, and open data.

Given the planetary impacts of environmental change on our oceans, biodiversity and climate, virtually every environmental story these days has a global context. Climate change, in turn, has become “the biggest story in the world,” according to Alan Rusbridger, the Guardian’s editor in chief.

But relating stories about slow-motion environmental crises like climate change is notoriously difficult. “The problem with this story is it’s so big, and it doesn’t change much from day to day. Journalism is brilliant at capturing momentum, or changes, or things that are unusual. If it’s basically the same every day, every week, every year, I think journalists lose heart.”

Yet at the same time we have more information about how our interconnected planet is changing than ever before. Satellites, sensors, and networks (both professional and social) are gathering important environmental data at an unprecedented level, from the sky to the earth.

Satellite and sensor technology are growing in number and advancing in precision. Recently, NASA has made a series of announcements about their new earth observation missions and NOAA has announced two new supercomputers to process the data into global forecast and climate models.

As the program officer for Internews’ Earth Journalism Network (EJN), I collaborate with a global community of journalists, technologists, and scientists who face the challenge of telling the story about our changing planet.

One of the main trends we see is that visualizing the context of this change with data — big and small — is a key component to understanding this evolving story. This February at EJN’s 10th anniversary celebration in San Francisco, Rebecca Moore of Google Earth Outreach told how she used mapping to explain how a planned development project would cut down acres of redwood trees in the Santa Cruz Mountains. “Seeing it is a game changer,” she said. Journalists are also now using this publicly available information to support their environmental coverage.

One of the key methods we have employed to help journalists understand and cover the environment is GeoJournalism.

By contextualizing local news with visuals derived from satellites, sensors, and open data, GeoJournalism has been used to explain the drivers of deforestation in the Amazon, track rhino poaching in South Africa and see how marine protected areas affect ship traffic in Indonesia.

With so many systems out there tracking the status of the planet’s health, telling this story with vigor and imagination should be more feasible than ever. But in many parts of the world, it’s not quite that easy to understand the background to this slow motion crisis.

Data on its own is not knowledge. Stories from and about people living closest to environmental hotspots breathe life and urgency into the data by adding local context. How, why, what and who is driving the changes? When that classic journalistic information is included, data can become evidence that engages people in the issues.

But for many of the local journalists in the EJN community, access to critical evidence needed to support their stories is a challenged by a lack of communications infrastructure, underfunded research institutions or reluctance by authorities to provide open data. Even the United States is not immune to this issue.

Last month, NASA Administrator Charles Bolden testified before the Senate about the 2015 Budget. He was questioned by Senator Ted Cruz, chair of the Senate Space, Science and Competitiveness subcommittee. In response to the senator’s proposal for NASA to adopt a “‘more space, less earth” strategy, Bolden said, “It is absolutely critical that we understand Earth’s environment because this is the only place that we have to live.”

Clearly, the Earth’s changing environment is a high stakes affair, and local media will have an increasingly important role in telling this story. Big global outlets are shrinking in size and smaller ones often lack the capacity to report on international environmental issues. Local media are often the best qualified to make sense of what’s happening on the ground, especially when a satellite can’t clarify it.

We’ve gotten to the point where data and the tools for explaining it are in the hands of journalists and communicators around the world. But to transform the global issues of climate change, deforestation, and air pollution into local, compelling stories it helps to see the big picture from the earth to the sky.

Leveraging technologies, skills, and perspective -from satellites and sensors, to community of knowledge — is at the core of not just understanding but responding to slow-motion crises and why journalists, scientists, and technologists need to work together to communicate this important human story.